Overcoming all the hardships, Ms. Puja Majumder today shines as an independent and successful woman Entrepreneur

“As like every other person I too had ambitions to somehow make myself independent but without any idea of how to do it”, says Puja Majumder, CEO & Co-Founder at Scrwab Expert Services Private Limited. As like everyone even Ms. Puja’s life was not so easy, as she had to face humiliation, comments, discouragement, judgement and sadly it was not only the outsiders but also from her own people. Inspite of all the chaos, the only people who always gave me inspiration were my loving parents. My mom being the pillar of my strength and dad making the strong base and teaching me how to deal with time.

She completed her schooling with just good marks. Back in school too, she had bitter experiences. However, she immensely thanks her teacher, Mr. Arindam who suggested her to pursue commerce as a part of her further education and she says he believed in her more than she herself did. And from there, she began her journey in commerce and completed her B. Com with finance Hons. and soon after that she completed my CA. First she did her internship with Aditya Birla. And then worked as a brand analyst in several companies. She then learnt share trading from her beloved mentor & brother Mr. Navnit and started trading. For everything she’s achieved, she makes a special mention about Mr. Vinod Mittal & Mr. Sandeep for guiding her through and encouraging her to start her own business. She says, it was Mr. Sandeep and her friend Me. Sanjay Kumar, who in the meantime became her c0-partner, helped her establish her base at Bangalore.

She says, there’s a long way to go and the fuel behind every success is to Keep Dreaming, Keep Working Hard And Not Give Up. 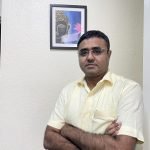 Achiever’s Success Story “To fulfil any dream, consistent chasing is required.” As it is rightly