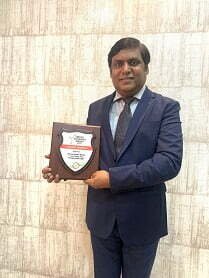 “The key to success is to focus on GOALS, not obstacles”

Mr Ghosh is one of the pioneers in the industry to focus on the water and sanitation sector solely and dreams to provide safe water and access to sanitation to upgrade health and hygiene for urban and rural India. After completing his Master of Environmental Engineering & Bachelor of Civil Engineering he focused on the water and sanitation related activities for more than 20 years. His experience in the field of Engineering Consulting Services has enriched him and the industry and currently holding the post of the Country Director of Tractebel GKW GmbH, one of the leading International Consulting Company. It is a part of Tractebel ENGIE group.

The journey with this company started 10 years ago when he left UNICEF to take this new challenge of making a company self-sustainable, reputed, and profit-making unit. The first taste of success came with a large ADB project at Srinagar, Jammu & Kashmir in 2011. Within next 5 years the number of projects increased from 1 to 10 and the success continued. Simultaneously, the unit started to record profit and from a small strength of 5 it is now a family 200 plus.  During last 10 years several ADB, WB, JICA, KfW, DFID as well as different government funded projects all over India has been successfully implemented and several are ongoing.  The journey was never smooth as during these initial years he faced lot of challenges from various fronts but overcame the obstacles with flying colors and under his leadership, this company became one of the preferred companies among Indian clients, IFIs like ADB, KfW, WB etc. and now is considered within the top 5 international consulting companies in water & sanitation in India.  Indian operations have been considered as a role model within the whole company and it is highly acknowledged at the highest level at Germany and at Tractebel group head quartered at Belgium. The recent feather in the cap was that Indian office has been selected as an international competence center for the whole world in water supply & sanitation.